When I first saw Center Cam, I was not exactly impressed. I mean, look at it — it’s a webcam on a stick. Against high-end competitors from very well-established brands, with eons of experience and near-infinite marketing budgets, it takes a particularly bold entrepreneur to launch something new in a heavily commoditized market. When it comes to photography in particular, I’m no stranger to calling out dumb ideas, and I was half expecting that Center Cam would fall in that category. I was wrong; the camera is very simple, yes, but it solves a huge and overlooked problem with fantastic video conferencing: It’s almost impossible to feel a deep connection with the person you’re talking to.

One of the things that helps people feel connected in conversation in eye contact, and if you think about how most webcams are mounted on your computer, it’s not hard to imagine how that doesn’t work — the camera is either on top of or (shudder… ) at the bottom of the screen.

Either way, you’re probably going to be looking at the people you talk to, which means you’re not going to meet their eyes — most people are looking far too low to experience eye contact. In business meetings, maybe that’s fine — but there is a class of video conferencing folks who really struggle with this, and that’s therapists, trainers and coaches. Speaking from experience, feeling connection with a therapist via Zoom is excruciatingly hard. The typical approach is to place the speaker’s window as close to the camera as you can get them, and then make the window pretty small, but even then, you don’t get the right connection.

FaceTime has long had a feature that adjusts your eyes slightly so it looks at you are looking at the camera, even though you’re not, and Windows 11 recently announced it’s launching a similar feature. Frederic hates it and I get why – it doesn’t look great. While it’s possible to fix this issue in software, I was pretty curious to see whether a hardware solution would be better.

Between my main Specular video light and about $300 worth of colored LED lights for my background, it’s no wonder the camera got a little confused about its white balance. Image Credits: Haje Camps for TechCrunch

In short: Yes. It is. A lot better. The camera itself is a relatively high-quality USB camera on a metal flexible hose, and it comes with a clip to keep it secure on your screen. Yes, it does obscure part of your screen when you are using it, but it didn’t feel nearly as distracting as I thought it would. The cam has a USB-A connector and comes with a USB-C adapter in the box, so most computer users should be able to use it. There’s no software included, but both my Mac laptop and my Windows computer found the camera and were able to use it without any kerfuffle.

The white balance on the camera was tricked by the colored lights I use for my background, but that was pretty easily resolved by running the camera through OBS and adjusting the exposure and white balance manually. Most users don’t have $900 worth of lights to run their web cams, so perhaps this is a problem that’s unique to me — when testing in more normal lighting situations, the camera worked as you’d expect, with image quality on par with or slightly better than the camera that’s built into my M1-processor MacBook Air. 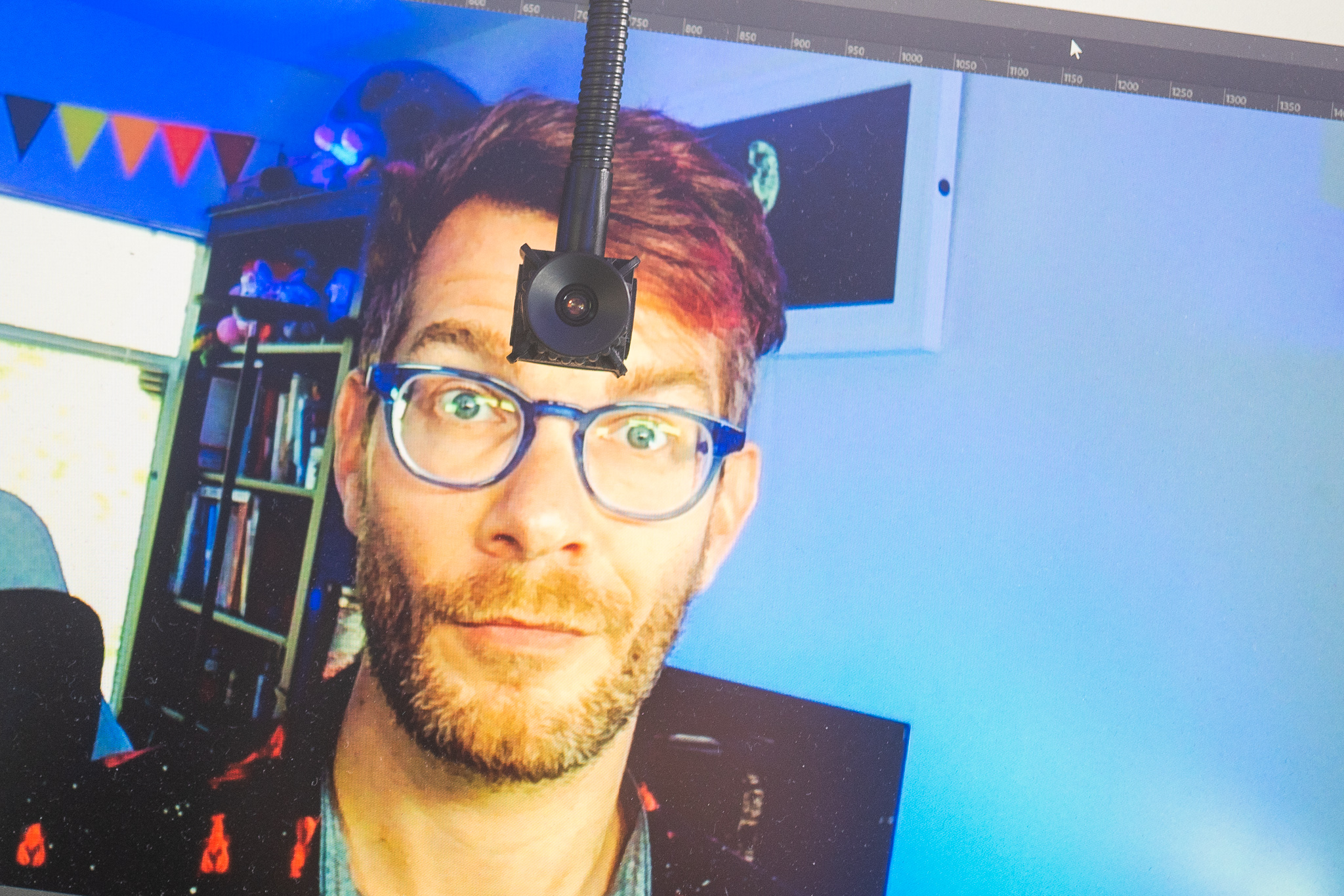 Place the camera more or less between the eyes of the person you are talking to, then look them in the eyes. It creates a perfect illusion of eye contact, unlike anything I’ve ever experienced in video conferencing. Image Credits: Haje Camps for TechCrunch, who is in desperate need of a haircut.

“I’ve always wanted to be a counselor; that goes back to the real origin story, back when I was coming apart as a teenager. I had some people who helped me, and I always wanted to circle back to that,” explains Ian Foster, CEO and founder of Center Cam. “I finally was finishing my degree when 2020 hit. It was my last semester, and I was working with kids just like I had been back as a teenager. I was a substitute counselor, and when the pandemic hit it meant that I couldn’t meet with these kids in person anymore. I immediately switched to remote. I’d been in lots of Zoom calls, but I hadn’t actually been in any that I cared about this deeply. All of a sudden, I realized the tech was coming between me and the kids, and I started looking at ways to make the tech suck less.”

In the process, Foster found the smallest USB-enabled security camera he could find and made prototypes by duct-taping the camera to the screen. The prototypes themselves didn’t work all that well, but he did discover that the connection with his clients deepened, and he was encouraged to continue the experimentation.

“I spent a whole year developing the clip, the flex tubing and making incremental improvements,” laughs Foster, thinking of the early days.

A commodity webcam and some flex tubing don’t exactly make a defendable product, but the company has found a deep connection with its audience nonetheless. The team claims it has shipped more than 16,000 units to date, and it is currently on its third internal revision of the camera. This version has passive heat fins on the outside of the camera to keep the imaging chip cool — cooler chip means less noise means better image quality — and the company suggests it is working on a complete revamp of the product that’ll look function even better .

“It’s more than just a camera. We’re trying to improve the tech as fast as we can, but I think more so than the tech. People really want to feel connected to people. I was working on a master’s project: a documentary on substance lifestyle in Alaska. It was the scariest thing I’ve ever done, but the big takeaways for me were connectedness to land resources and to each other. That’s where my heart was at the time, and then all sudden, I had relationships with these kids that I was working with, and it all just fell apart,” remembers Foster. “It all t became part of what we’re trying to do: a better connection. It’s not just a tagline. We’re really trying to increase the quality of connections online. It is no accident that 15%-20% of our customers are coaches or therapists.”

I was so ready to turn the snark to 11 on this product review, but in trying it out, the little block of metal won me over. I legit think it’s the best webcam I’ve ever used. Not because the cam itself is incredible — it is not. You don’t have to look far for better features, better image quality and a higher degree of user friendliness. Besides, there’s a downside to being able to have great eye contact: If you are the kind of person who likes to take notes or sneak in a tweet or two during meetings, it becomes very obvious that you’re not paying attention to the person you are talking to.

This product has one major thing going for it, though: It does a better job at what webcams should do than most. Helping humans connect from a distance.