We’ve come a long way since having to stretch coaxial cables for token-ring networks — most devices shipped today don’t even have a wired network connection. It’s a different story for power, with every bedside table, desk and airline seat having a USB cable flopping around near it. Israeli startup Wi-Charge Wants to change all that by beaming up to one watt of power wirelessly to devices across homes, offices and commercial locations. The company told me it has just inked a mysterious deal with Belkinand we can expect the first wireless power device to show up from the accessories manufacturer later this year.

The company paints a vivid picture of all the situations where charging cables don’t make a lot of sense — in particular in low-draw situations where you would typically use an alcaline battery or a rechargeable battery. One such example was an electric toothbrush charger — bathrooms are getting sleeker and better designed, but the charger cables are an eye-sore.

“I’ve seen a million-dollar bathroom with ugly power cords,” says Ori Mor, CEO and co-founder of Wi-Charge, encapsulating a use case. “When people talk about wireless charging, they talk about proximity charging. In 2018, we received a CES Best of Innovation award for charging an iPhone from a few meters away, but that was a bulky transmitter. We went on for another few years to miniaturize it. Now we are finally deploying our technology. We started with commercial applications — we developed a simple LDC display with our receiver inside. There is power with a 10-meter range wireless in commercial settings.”

One power transmitter can transmit to a wide number of receivers, and commercial users are less sensitive to pricing, so Wi-Charge was able to run a number of trials and test installs. 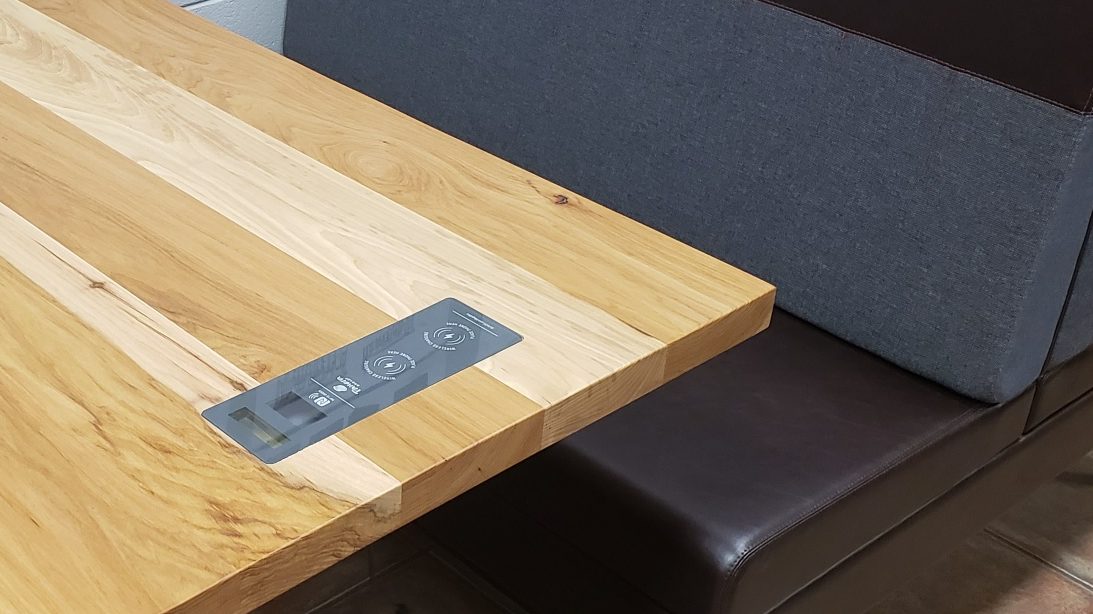 In restaurants, it can be tricky to retrofit power to every table, but customers appreciate being able to charge their devices. This demo combines wireless power to the table with wireless Qi charging to the phone — all without routing wires to every table. Image Credit: Wi-Charge.

“In line with our continued commitment to deliver the best charging experience to our customers, we are excited to uncover the full potential of Wi-Charge’s unparalleled over-the-air wireless charging technology,” said Brian Van Harlingen, CTO, Belkin. “The future of charging has been transitioning from wired to wireless for years now and we anticipate over the air wireless charging to accelerate this evolution.”

Wi-Charge is understandably excited about its Belkin connection.

“I can’t tell you exactly what Belkin is launching, which is a bummer, because it’s a center-stage consumer product. Belkin is super interesting because of several things: It is a consumer company that is super aggressive on the timeline, and they chose a perfect application,” explains Mor. Belkin does aftermarket accessories to charge other devices, and they do powerline products, smart home products, etc. This allows us to give them an unfair advantage for [wireless power]. I think it’s time. Everyone is waiting for wireless power.”

The Wi-Charge team tells me that the Belkin tie-in is for a specific product, but that there’s a long list of other products in the hopper that would do very well with wireless power.

The tech itself uses an IR beam that goes from a transmitter to a receiver, in a targeted beam, rather than blanketing the whole room. That certainly seems like a better idea than my original vision of the tech, which was more akin to me getting slowly boiled alive inside a microwave oven.

“If you have to blanket the entire room with power, you get an environment that neither the users nor the regulators will approve,” says Mor. “We deliver a beam directly to the receiver; 100% of the power that leaves the transmitter reaches the receiver.”

The company originally started delivering four watts of power, but it quickly pivoted into more IoT type devices, after the company went on a road show and found that companies wanted lower power and a smaller, more easy-to-install transmitter. In particular, devices that sometimes use more power, but are in standby mode most of the time, are a good fit. Think smart doorbells, door locks, sensors and other smart devices.

“Our lowest power delivery now is around 70 milliwatts, and it goes up to one watt. That means that we deliver 1,000 times more power than any competitor in the field,” explains Mor, arguing that the technology has a green-tech angle as well. “A single transmitter can save 5,000 batteries.”

I challenged the company on its power delivery — one watt isn’t a lot in a world where phones can draw 10 times that when they are charging wirelessly. Of course, charging a phone with a one-watt charger, you’ll still eventually end up with a charged phone, but that isn’t the main use case here. 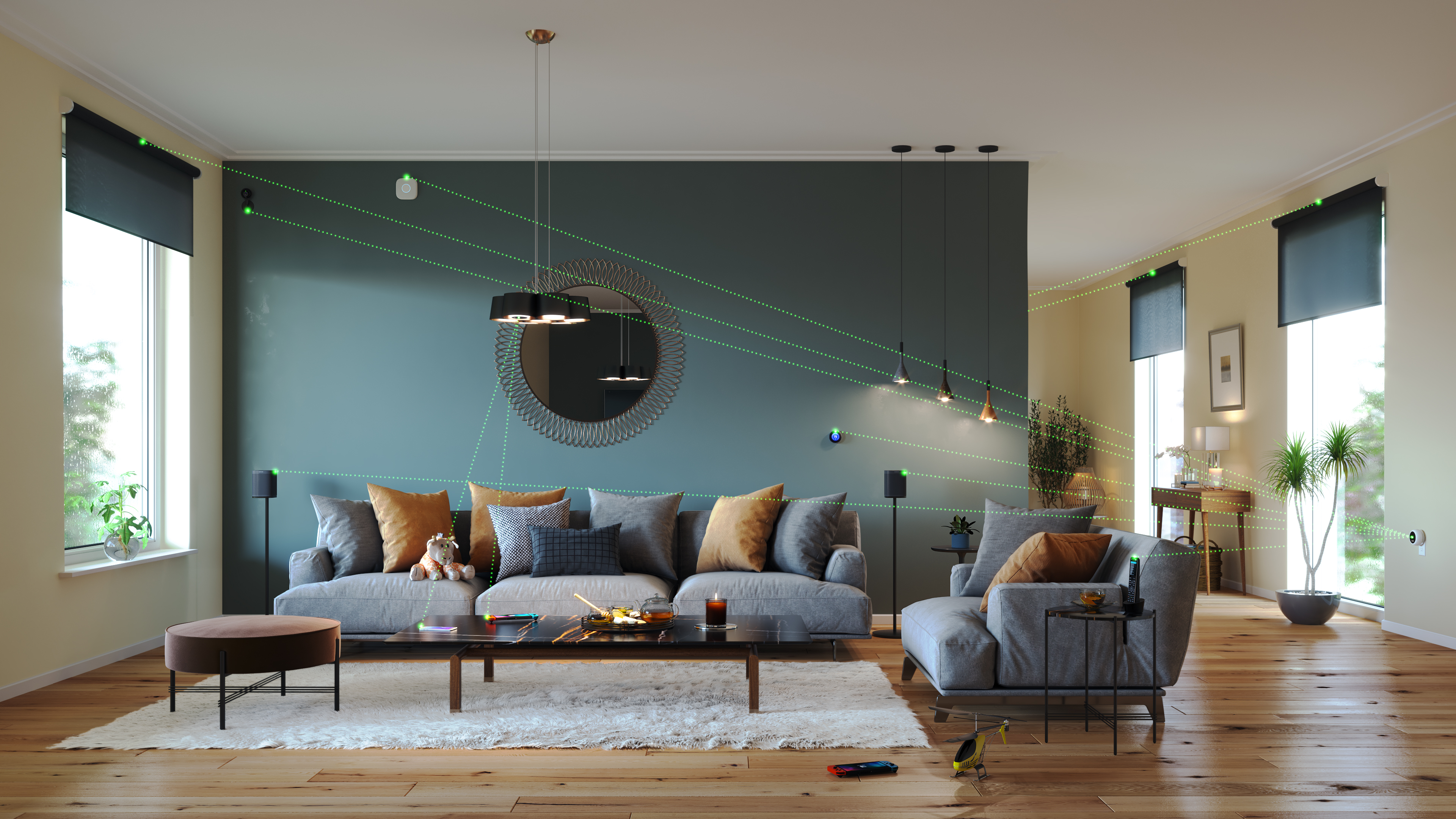 Back to the smart lock: The average power a smart lock will consume is in the milliwatt range. When it connects to your phone and opens or closes a deadbolt, it might draw a couple of watts. Incorporating a small battery into the design overcomes this issue: For 23 hours and 58 minutes of the day, the battery can be charged, and the 0.15% of the day that the lock is actually locking and unlocking doors, it can rely on the power in the battery. You might also imagine a design where wireless power charges a battery pack inside a charger pad, carrying enough juice to charge a cell phone at full speed. When you place the phone on the wireless pad, it charges from the pad’s batteries; when it’s off the pad, it recharges itself.

The company has raised $50 million over the years — most of it over the last two years — and employs around 40 people. R&D is based in Israel, while its sales and marketing efforts are focused on the US, Korea, Japan and Europe.

Personally, I gotta say I can’t wait. I want wireless charging everywhere, and let me finally get rid of all these dumb wires.