Elden Ring is the latest game in the storied tradition of punishing, mysterious titles by developer From Software, following fiercely-loved hits like the Dark Souls series and Bloodborne. I’ve wanted to love these games for a long time. I’ve followed the releases, watched precision speedruns and read treatises on their intricate level design. But something didn’t click.

Not for lack of trying, some combination of the bleak aesthetic, boringly elicit community (enjoying a popular video game franchise is not a personality!) and relatively on-rails gameplay experience put me off. I hoped Elden Ring would be different, that its unique blend of roving exploration and enticing esoterica would finally capture my attention.

So far it’s delivered and then some.

Note: Possible minor spoilers follow for the first two or three zones of the game.

Since Elden Ring launched a few weeks ago, I’ve been slowly picking my way through its rolling hills and spooky marshes, nudging the story forward here and there. Because I wasn’t convinced I’d wind up sticking with the game past the first few hours, I uncharacteristically crashed through the character creator instead of agonizing for hours over what class to pick, settling on the confessor, a sort of grim nun with a penchant for pyromancy.

Many ways to play

As a longtime JRPG and MMO player, my favorite games tend to have big, colorful environments. Life is dry enough as is and I’m generally hesitant to spend too much time in bleak, colorless worlds. Elden Ring doesn’t break continuity with the visual style of From’s other games, but the world is beautiful, expansive and grand more often than it is oppressive (giant ants notwithstanding, fuck those ants).

The game is littered with musty medieval dungeons and cramped mines, but at any given time you can pop back out into the overworld and watch the sun set. The juxtaposition between the vast, often evocative open world and the tense, interior parts of the game makes the latter digestible for someone like me who tends to get a little twitchy when I spend too much time indoors in games. Double indoors — that’s no good!

If you’ve thought about playing Elden Ring but you’re hesitant, or if the game’s reputation for being hard is putting you off, know that there are lots of ways to mitigate the challenge. For one, you can just grind away, killing small enemies and overleveling enough to make the next dragon-handed monstrosity you meet a bit more manageable.

If you’re hitting the wall, you can also switch your playstyle, tossing magical beams at a range instead of chipping away up close with whatever massive, rusty implement of destruction you’ve been swinging around. There’s also stealth, archery, agility-focused builds, weapons that inflict status effects and faith — a sort of parallel path to traditional magic that unlocks stuff like dragon incantations, healing spells and a lot of cool utility options. If all else fails you can go old school and pick up a big ass sword and shield and make that work.

In spite of my initial less than stellar build (dex/faith/mistakes), figuring out a playstyle is a lot of fun, even though you’ll be stomped, gored and magicked to death many, many times in the process. The combat system is so deep and varied that I keep experimenting with new weapons rather than getting good with any one thing. That process is a game unto itself.

I started the game with a one-handed sword, faith-based magic and a dowdy habit-looking set of armor. Many hours later, I find myself mostly playing more like a religiously fervent version of X-Men’s Wolverine, gruesome claws aglow. At some point along the way I picked up a katana, a choice I recommend to anyone in any context, and a frosty ax that lets me freeze enemies around me with ice crystals. And that’s only scratching the surface.

Much like Monster Hunter, a series I really fell for over the last couple of years, switching among any of these weapons totally changes how the game feels. It’s a lot of fun! Elden Ring is actually many, many games in one and that’s a boon for anyone hesitant to dive into their first From Software title. You don’t have to be a diehard fan of the developer for this game and its infamous combat to click for you, especially if you’re willing to experiment.

Personally, I don’t have enough gaming time to git good. I prefer to git good enough — life is short and I have a lot of other interests! Happily, Elden Ring offers okay to unskilled players like myself a whole toolkit for turning on easy mode when we just don’t give a shit enough not to. That includes everything from obscure leveling shortcuts like killing a somnolent dragon in cold blood (Thanks, YouTube! Sorry, dragon!) to summoning AI-powered ghost buddies to bail you out or relying on ranged magic attacks instead of bashing things in the face.

When all else fails, you can summon another human player and hope they’re not just popping into your game to teach you a harsh lesson about self reliance. Of course, no matter how many helpful difficulty hacks you toggle on, this is still a hard game and playing it at all will be a time commitment that plenty of casual gamers just won’t be able to take on. That’s ok! 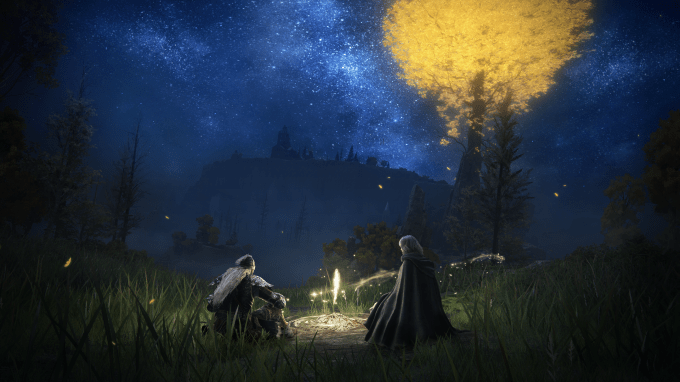 If you’ve not played yet, Elden Ring is a Very Big Game that has all the makings of the next Skyrim, an experience epic and detailed enough that people continued to dip back into it for a decade. Elden Ring is also as open a game as you could hope for, but that alone isn’t quite what makes it special. Once a novelty, open world games are a corporate formula at this point, allowing companies like Ubisoft to crank out massive, cookie cutter games one after the other. As a longtime Assassin’s Creed player, those games are like sweatpants for me — mindless, never particularly challenging but with fun, comfortable combat and enough exploration to be interesting. Elden Ring is a very different experience and both types of games have their places.

By law, any conversation about open world games must dedicate at least one paragraph to Breath of the Wild, 2017’s Zelda mega-hit that raised the bar for vast, thoughtfully designed worlds. And by law, any gamer must spent upward of 100 hours exploring Hyrule and loving every minute of it — as I did dutifully. Incredible as it is though, Breath of the Wild’s siren song faltered a bit once I’d traveled to the far corners of the map and figured out that there weren’t exciting secrets at the top of every towering peak (more often, it was just another korok seed). 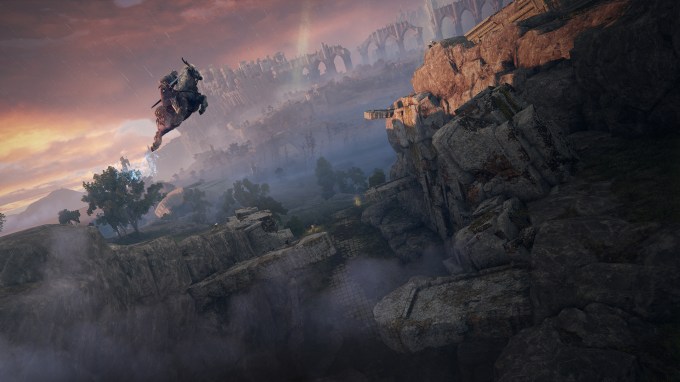 For as big, interactive and delightful as that game is, exploring Elden Ring’s haunted landscape is on a whole different level. From Software rewards exploration handsomely, doling out a wonderful variety of strange interactions, hidden treasures, secret zones, power ups and completely optional boss fights for the explorer intrepid enough to push beyond. From Software’s human touch is on full display here and every little secret sprinkled in feels like a human person engineered exactly how that moment would unfold rather than just blasting waypoints onto a map out of a t-shirt cannon, a la Ubisoft.

More than forty hours in, Elden Ring is just beginning to reveal its true scope. The map is expanding outward, but I keep remembering weird little mysteries I want to investigate and areas I wanted to sneak into underleveled, so I’m going backward as often as forward. Because the game is so open and save points are so generous, you can easily dedicate your hours in Elden Ring to doing whatever you want, whether that’s clearing previously impossible bosses or delving for secrets at the map’s farthest reaches.

Or I might just ride my spectral horse through the plains and watch the sun slip below the horizon, clouds looming like so much beautiful, ominous sorbet. I may get trampled into dust by a mechanized giant wielding a fire sword the size of a school bus, but that’s okay. I can just bounce back up and do it all again — or do something else.