The positive impact alternative meat products – like plant-based meat or cultivated meat – can have on the environment is striking. In optimism scenarios where we transition to from meat-laden to plant-based diets over the next 15 years, between 61–68 percent of agriculture’s greenhouse gas emissions can be avoided.

Except for the fact that alternative meat has a big scaling problem.

The Good Food Institute (GFI) estimates that alternative meat producers will need to create 800 production facilities, and spend about $27 billion within the decade to meet global demand.

To do this, cultured and plant-based meat companies need to solve scientific problems ranging from bioreactor size and efficiency to the high costs of growth factors used in cell-cultured meat. Some startups see these scaling problems as a foothold in the alternative meat space. Rather than launching brands, these are B2B alternative protein companies developing scalable industrial production platforms. There are two companies in This year’s Y Combinator cohort embracing this model.

Mooji Meats was incorporated just 6 months ago and is in the midst of raising its first $2.5 million seed round. The company has developed a 3D printer capable of producing whole cuts of meat using plant protein or cultured meat cells. They’re developing a 3D printed cut of Wagyu beef, and expect a prototype to be viable for taste tests within 6 months, co-founder Insa Mohr told TechCrunch.

“There’s always this tradeoff between scale and texture,” Mohr told TechCrunch. “3D printing always creates great textures without being scalable. Then there’s other technologies being scalable but not creating good textures. Especially not for steaks. And we overcome this trade off.”

Mohr claims that Mooji can print out these cuts of meat by layering fat, connective tissue, and muscle cells in a marbling pattern, but she didn’t provide many details on how that happens. Mooji’s key advantage, she says, is speed. Mohr said that one printing head is “250 times faster” than existing 3D printers.

At this early stage, it’s not a crime to be secretive. But proof of this enhanced operating speed needs to be visible soon. Mohr claims that the $2.5 million Mooji is currently raising should be enough runway to get the company to their first customer, and, one would hope, proof of concept in the real world.

If you think plant-based meats will have issues meeting demand, that’s nothing compared to the cost challenges cultivated meats face.

Some companies at least claim to break that cost barrier. In December 2021 Future Meat, an Israeli cultured meat company recently raised a $347 million Series B round led by ADM Ventures (an astronomical jump from its $14 million Series A), and claimed to be capable of churning out a pound of chicken for $7.70, less than half of the $18 it cost 6 months prior. But that’s still higher than the roughly $3 cost per pound of regular chicken.

Anne-Sophie Mertgen, the founder of startup Micro Meat, told TechCrunch that most new cultured meat companies are still struggling to get their businesses up and running at scale. 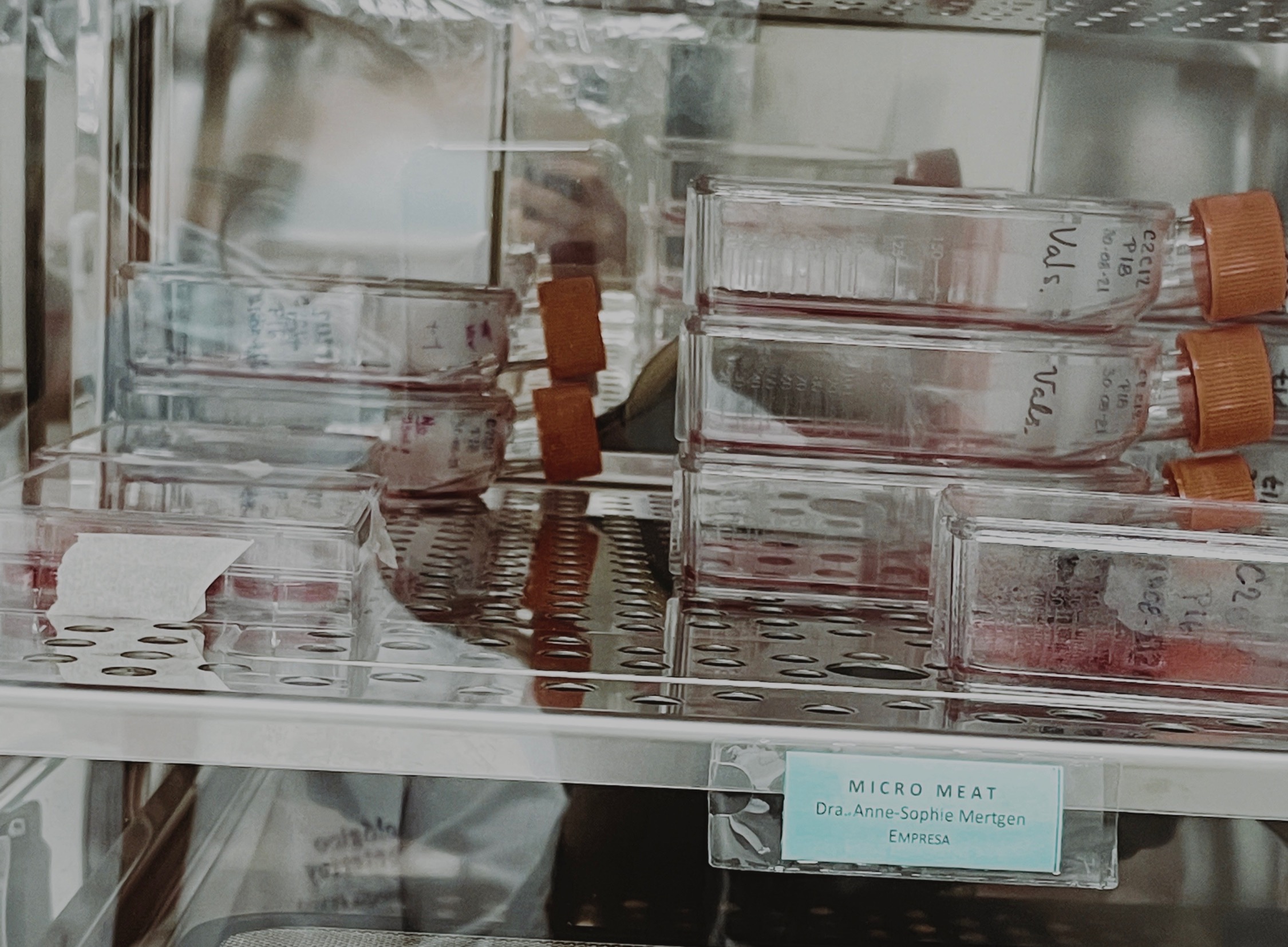 “No other industry exists where the big players are completely vertical,” she told TechCrunch. So we really believe that to build this industry at the large scale that is needed to feed the world. we need more b2b players.”

Micro Meat was founded in 2021, while Mertgen’s postdoc work at Tec de Monterrey in Mexico was paused due to the pandemic. Micro Meat’s focus is creating cell tissue scaffolds. Scaffolds are structures that facilitate the flow of nutrients and give cells the cues they need to form mature muscle tissues. Unstructured ground products don’t need hugely complex scaffolds, but cuts like steaks do.

“We can cultivate them [tissue scaffolds] using similar processes that the cultivated meat industry is using, like biopharma reactors, for example,” she said. “We can scale this indefinitely, like right now we can produce, easily, with our first prototype, 100 grams in a minute.”

The tech is currently in a prototype phase, but Micro Meat has successfully created a cultured pork product, she said. The company has raised $375,000 to date in pre-seed funding, and are in the process of raising a $2 million seed round.

That round should provide up to two years of runway needed to establish an R&D line, perfect more devices and consumable products, and reel in some co-development contracts, said Mertgen. 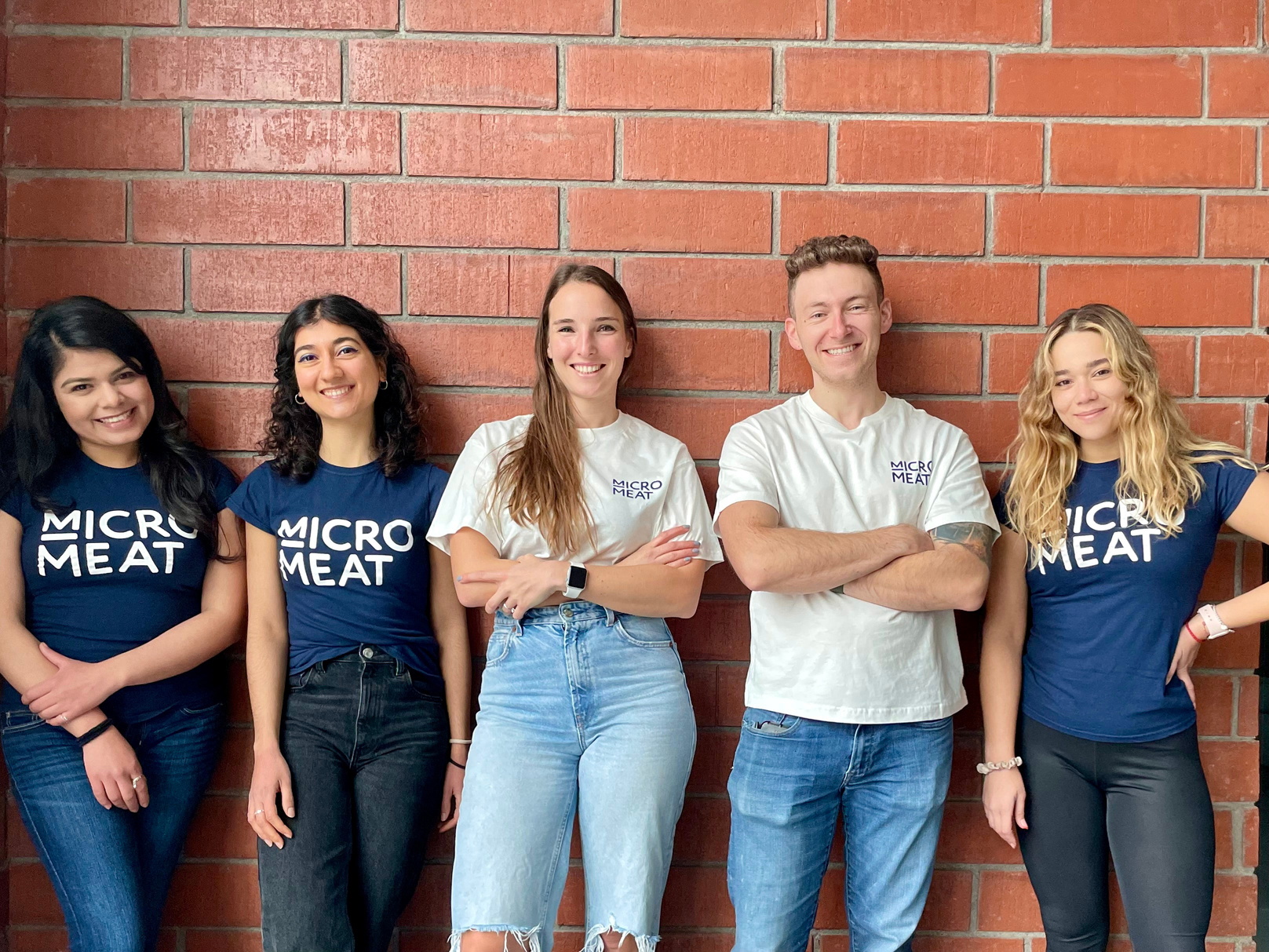 The Micro Meat team. Cofounders Ann-Sophie Mertgen and Vincent Pribble are third and fourth from the left.

“The first B2B players entered the market in 2017, while the first cultivated meat companies were established in 2013-14,” Mertgen said. So this is generally a super young industry, but I think it’s really going to be needed.”

Mohr says that she’s seeing some of these companies emerge now: ““There’s more and more platform solutions evolving, which basically shows us that the industry as a whole is evolving,” she said.

But there are yet more holes in the alternative industry that need to be plugged, industry analysts have noted. Two that stick out right now are: more diverse protein sourcing options for plant-based meat, and cheaper growth factor sources for cultured meat products.

The good news is that there’s money for companies looking to dig into these problems. The amount of private funding into the alternative protein space has heated up since 2020. That year $3.1 billion was poured into alternative proteins, a 3x increase in funding from the previous year. And in 2022we’ve continued to see big funding rounds close.

That’s a nice setup for an industrial alternative meat platform company with the ability to scale this nascent science. Each supply chain problem is a big enough scientific challenge to make or break a company, if not a career.