Just because you know how the story ends doesn’t mean that it’s not fun to watch how it all went so horribly wrong.

That’s the premise of an entire emerging genre of media, mostly produced by streaming platforms, which chronicle the most salacious stories in tech, startups and wealth gone wrong. Hulu’s “The Dropout,” which focuses on the fall of Theranos, is the latest. There’s also Apple TV+’s upcoming “WeCrashed” series, based on the podcast “WeCrashed: The Rise and Fall of WeWork,” and then there’s Showtime’s recent “Super Pumped: The Battle for Uber,” featuring stars like Joseph Gordon-Levitt and Uma Thurman . And lest we forget when Netflix and Hulu both released Fyre Fest documents the same week, or when Netflix rushed to option a film about the alleged husband-wife bitcoin launderers before their case has been resolved.

But when you’re told the same story again and again without gleaning anything new, it loses its charm. Even before Elizabeth Holmes was found guilty of defrauding investors in January, we had little left to learn from her story, which has already birthed true crime podcasts, books and documentaries. We read “Bad Blood,” the Theranos tell-all by journalist John Carreyrou, whose reporting directly contributed to Theranos’ downfall from a $10 billion valuation to nothing; we watched the HBO documentary “The Inventor: Out for Blood in Silicon Valley;” and we observed in real time as Silicon Valley live-tweeted her four-month-long trial, which was so popular that onlookers had to wake up at 3 am to make sure they could get a seat.

Yet today, Hulu will release the first three episodes of “The Dropout,” and soon, Apple TV+ will unveil its “Bad Blood” movie, starring Jennifer Lawrence as Holmes.

These online streamers keep churning out this content because they know we will watch — we’re desperate and eager to understand how people can be so corrupted by the promise of money and fame that they will sacrifice their morality.

Featuring Amanda Seyfried in the lead role, “The Dropout” is the first fictional re-telling of Holmes’ story, which we know so well by now: The youngest female self-made billionaire vows to change the healthcare system with ground-breaking technology , only for the world to discover that the woman they compared to Steve Jobs was peddling technology that never even worked.

The series opens with fictionalized footage of Holmes on trial, but other than these brief asides, the story of Theranos is told in a straightforward, linear narrative. From this perspective, “The Dropout” feels like watching a car crash in slow motion. You can’t look away, but you don’t really enjoy the sight.

Seyfried’s interpretation of Holmes is reasonably convincing as she goes to deranged lengths to convince investors, board members, Walgreens partners and her devoted employees that she isn’t full of shit (spoiler alert: she’s full of shit). We’re also forced to watch as she falls in love with Sunny Balwani, her eventual COO who’s 18 years older than her, despite knowing that in 2021, Holmes would tearfully allege in court that he routinely abused her over their 12-year relationship. “The Dropout” makes it clear that Balwani isn’t a hero in the Theranos story. But as she dives head-first into being a CEO, the stomach-turning dynamics of her secretive relationship with Balwani are glossed over in a way that’s difficult to watch.

The show also recounts Holmes’ alleged rape when she was a Stanford freshman in an attempt to contextualize the personal catastrophes that made her so hellbent on achieving fame and success. She recalled in court last year, “I decided I was going to build a life by building this company.”

In early episodes, Stephen Fry’s performance as chief scientist Ian Gibbons is a highlight of the show. But for viewers who know Gibbons’ fate, each of his jovial appearances summons a sense of foreboding. In 2013, Gibbons died by suicide shortly before he was required to testify in a lawsuit about Theranos’ technology. His widow, Rochelle Gibbons, said that when her husband died, Holmes never reached out — instead, an office manager just asked that she return Ian’s laptop.

As we watch Rochelle learn of Ian’s death, Holmes no longer feels like a young woman who’s in over her head. She’s a villain, but a complicated one. “The Dropout” still tries to humanize her, taking a bit of creative license to imagine personal aspects of her life that we will never know. This version of Holmes that Hulu caused mourns Gibbons’ death, worries about her company’s lack of viable technology and even asks her mother what would happen if she quit Theranos. But even in this mildly sympathetic look at Holmes, she isn’t a likable character.

Streamers know viewers are fascinated by unlikeable central figures, however, which translates into views. For instance, Netflix recently released a limited series based on a true story about a young female scam artist. The series, “Inventing Anna,” tells the story of Anna Delvey, an infamously fascinating criminal who is enigmatic in the same way Elizabeth Holmes is — you don’t root for her because her actions are just too heinous to justify; but you want to know more about her, so you’ll watch seven to 10 hour-long episodes over the course of one weekend. Netflix viewers spent 196 million hours watching “Inventing Anna” between February 14 and 20, making it Netflix’s most-watched English-language series over a one-week period. The show debuted on Friday, February 11, racking up an additional 77 million hours viewed over the weekend it was released.

Unlike “The Dropout,” “Inventing Anna” frames the story of the fake German heiress through a fictional journalist’s pain-staking reporting — the scams and trickery have already happened as the journalist convinces the victims of these scams to tell their side of the story . Like us, the fictional journalist is enraptured with questions of how a young woman could nearly scam Fortress Investment Group out of millions of dollars. 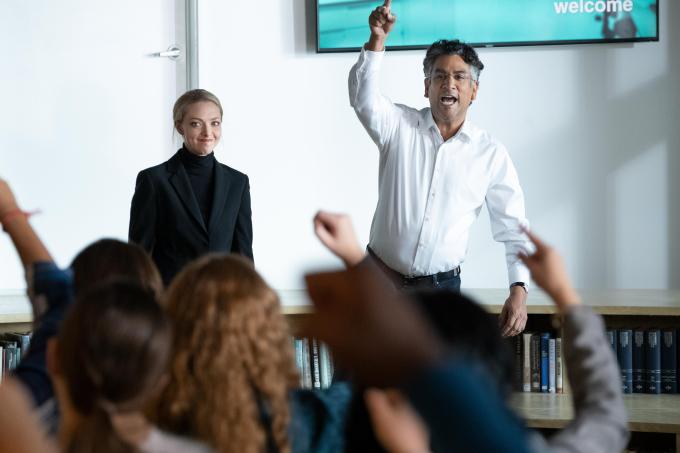 But the story of Elizabeth Holmes is ultimately scarier than the misdeeds of Anna Delvey. Delvey — whose real last name is Sorokin — basically just stole money from obscenely rich people, which is of course morally abhorrent, but it doesn’t quite stir up the same rage as Elizabeth Holmes’ company giving ordinary people false medical results, which could endanger their lives.

If “Inventing Anna” were oriented as a linear narrative, it would probably still be entertaining, since she wasn’t posing an ever-growing threat to human health (…only to their wealth). But “The Dropout” just isn’t a fun watch — it’s like yelling, “No, don’t do it!” to the horror movie character who decides to walk into a creepy house, only that scene lasts for eight episodes, and it’s based on a real story.

A lot has changed about our attitude toward tech in the times since movies like “The Social Network” (2010) were released, painting Facebook founder Mark Zuckerberg as a “tragic hero.” Now we look at these stories of startup founders with rightful skepticism, which makes sense in an era when Facebook whistleblower Frances Haugen appears on prime-time television, telling us that Facebook prioritizes profits over public good. Gone is the excitement of Apple debuting the first iPhone (a moment depicted in “The Dropout,” as Hulu’s Holmes queues in front of an Apple Store to buy one). Now we watch as Elon Musk laments “billionaire taxes” on Twitter, and Jeff Bezos gets wealthier while Amazon workers struggle to earn workplace protections.

Maybe if “The Dropout” came out around 2018 or so, it would have been a compelling introduction to an important moment in Silicon Valley culture. But for now, it feels more like Hulu’s attempt to cash in on our current cultural fascination with failed startups and scams.