Hellar Armbruster admits he was keeping close eyes on this year’s Oscars race. And why not? His company had more than a small hand in helping director Guillermo del Toro realize his vision for Best Picture nominee Nightmare Alley. The film, up for four statuettes at this Sunday’s 94th Academy Awards, arcs the journey of WWII-era grifter Stan Carlisle (Bradley Cooper). It’s a journey that begins amid the dusty kiosks and seedy sideshow attractions of a traveling carnival. Carlisle and his colleagues ply their trades within familiar, foreboding canvas tents — the kind sturdy enough to stand all manner of middle-American weather, and whose wind-blown flaps entice curiosity seekers over a threshold of decency. And each one was hand-sewn and readied for its closeup by Hellar and his crew at Springfield, Illinois-based Armruster Manufacturing Co.

The 147-year-old tent- and awning-maker has been a family owned business since its inception. Hellar, a fourth-generation president, inherited the reins in 2005 from his father, Bernard Armbruster. Since then, the company has contributed its craftsmanship to other Hollywood productions including Sam Raimi’s Spider-Man 3 and the Johnny Depp-starring Lone Ranger. But it has also contended with changes in innovation and market needs, economic ebbs and flows and — like all other businesses — the ongoing pandemic.

One of the Nightmare Alley tents under construction at Armbruster HQ.

Still, like its signature product, Armbruster has stood tall. We caught up with Hellar a few days before the Oscars ceremony and discussed the lottery-like elation of being chosen by del Toro’s team (namely, production designer Tamara Deverell and set decorator Shane Vieau, nominated together for Production Design); the cloak-and-dagger secrecy of their collaboration; and how a family run operation endures for nearly a century and a half without coming apart at the seams.

Related: 18 Movies Every Entrepreneur Should Watch

Firstly, I know you personally aren’t nominated, but congrats. It has to almost feel as if you are.

Yeah, we’re really happy to be associated with that project. That was a fun one for us.

How did you first find out about the nomination?

I’ve been monitoring on social media what’s been going on with the film, and I saw all the nominations, especially for [Production Design]. And I was like, “Wow.” I mean, we’ve been in a lot of movies before, but it was the first one where the set decoration is actually up for an Oscar, so we were really thrilled.

And it was Tamara Deverell and Shane Vieau who tracked you down for the project, correct?

Yeah, I worked directly with Shane through the whole project, and Tamara was kind of the lead. She was searching for an American-made circus tent maker that could make specifically historical ones. When they fell upon us, they were just overwhelmed. They were like, “We can’t believe we found a company that could do this for us.”

You guys have a pretty solid web presence? Is that how they found you?

Absolutely, it was our web presence, and they’d seen other previous circus projects we’d done. They were just like, “I think we just found what we were looking for,” and that’s what led to the phone call from Shane.

Did you jump and say yes or have to evaluate if you had the bandwidth first?

Well, for each one of these projects, I do look at the bandwidth, because the first [concern] that usually comes up when I do any work for Hollywood movies is they need this stuff in two weeks. I’ve never been given enough time, but this I knew was a more professional company. Well, at first I didn’t know who it was for or what the movie was about, and they didn’t tell me until the project was almost complete. It was all in the dark. But they gave specific tasking and said, “Well, we’re not filming until a certain date,” but then what fell into our favor is when Covid started, they had to stop, and that gave us a chance to catch up wherever we were behind. And then they added on a lot more skirting and canvas details you see in the sets. We built all that as well — all the kiosks and all that. When we got the first shipment of goods to them in Toronto where they were filming [in January 2021], they were so impressed. They came back and ordered a lot more. 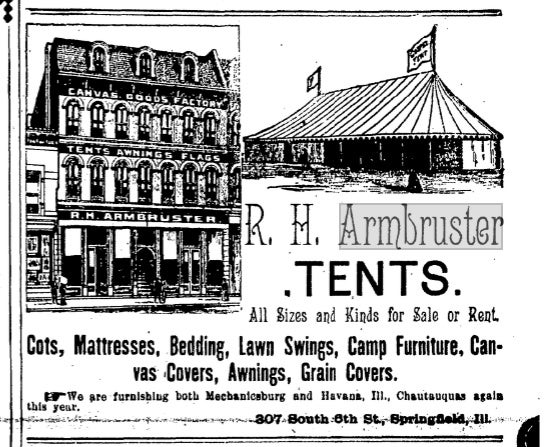 An early advertisement for Armbuster’s services.

I can imagine getting this gig was a real boost to both team morale and your bottom line.

At that point, the largest set production we’d done for a movie was The Lone Ranger, but this was quite a lot more, and so people were excited about it. It was a full team push with our production team, and it was a great injection in the arm business-wise, especially at the beginning of the whole pandemic when all the other work we traditionally did just stopped. So that saved us.

But you guys were able to provide a product that so many businesses needed in the age of outdoor-dining tents. Was it a scramble to get that message out to the community? How did you go about that?

Just with our web presence, and through our SEO work. That’s what my wife specializes in. She built our website and everything. She’s a user-experience design-and-information architect, and so she has really helped project an image of our company internationally in the last 10 to 15 years.

I’m guessing that however the Oscars turn out, you’ll be touting this connection far and wide.

Absolutely. As much as the NDA [non-disclosure agreement] allows me. [Laughs] I mean, all I can talk about is like the type of tents we built and what we did here at the factory, but when it comes to Tamara and Shane, how they did the set and production design, and their whole scope of how they want it to look and everything with the director, I’m not allowed to talk about that.

So while you were working on the film, you couldn’t actually advertise that relationship.

Yeah. And like I said, we didn’t find out until almost the very end who we’re doing it for. And I actually, I found out on my own just searching around like, “What directors are making movies about old circuses right now?”

Were you already a fan of del Toro’s work?

Absolutely. I was just overwhelmed. I was like, “You gotta be kidding me. This is for his film?” And at that point, everybody was just ecstatic.

How bittersweet that you had to bite your tongue.

It’s funny, some movies are very strict about that, and some that I do — we just did some work for Steven Spielberg in England for the new series [Masters of the Air] following up Band of Brothersand they could care less if we talked about it. 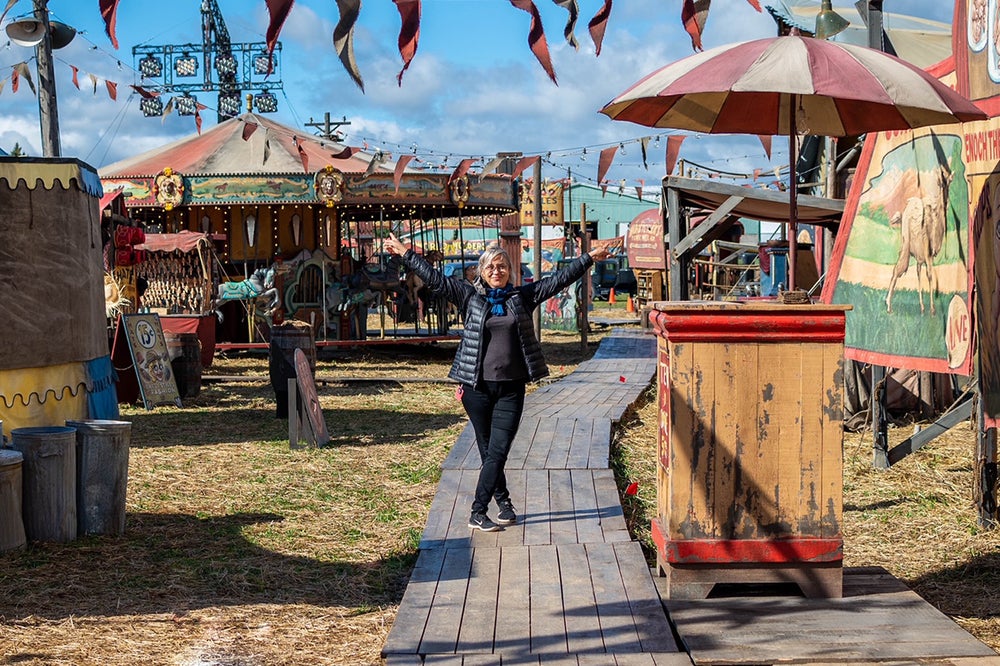 Dream projects like this notwithstanding, it’s more challenging than ever maintaining a small, family run business after so many generations. Do you ever think about hanging up your canvases and calling it a day?

[Laughs] Trust me, I know I can’t do this forever, and there’s some talk of perhaps my kids getting involved as the fifth generation in the company. But things are so volatile, and the markets change. Who could have ever guessed that this pandemic was going to hit, you know? And then we were lucky enough to remain flexible enough to adapt to that. I never know what the next punch is going to be, but we’ve done it since 1875. I mean, my great-grandfather who started the company had the hardest challenge of getting established as an immigrant in America at that time. I can’t imagine what he had to go through just to keep the ships from sinking.

And I always ask this of any family run business, but how does it not tear you guys apart?

Oh, it does. It’s family rivalries and those challenges that go with a family business, and we’ve had them through the generations, but we power through every time. We stay focused on the goal. We stay focused on our employees and the name of the company and what’s most important. If somebody ends up falling out, there’s always somebody to keep it going.

Right there on your site, it emphasizes your “willingness to listen to customers and evolve with an ever-changing market.” Practically speaking, what does that mean to you?

People have challenges or problems that have to be solved, and they come to us if they think they can do it with fabric or a tent. Those are challenges sometimes more than we can handle, but then a lot of times we can get creative. And I just look back with our long history of what we’ve done previously that gives us that experience to address whatever the current issue is. What’s been unique about the historical tents we made for Nightmare Alley is I just went back and opened up our catalogs from the 1890s and turn of the century, and it was all right there, and here we are just reproducing what we manufactured 100 years ago. It’s like I’m going back in time.

Related: Marketing Secrets You Can Learn From the Movie ‘Office Space’

Now, tell us: What was it like seeing your finished work up there on the big screen?

I took my wife and kids and, I just — I didn’t even hear the dialogue. [Laughs] I gotta go back and watch the movie three more times, because I just was like, “Wow. That’s, that’s all the stuff we worked on.” That’s all the stuff that my workers worked so hard to make look perfect, and it turned out just amazing in the film. I couldn’t believe it. My wife was just like, “The whole first half of this movie is nothing but your tents.” [Laughs] And I was like, “I know, this is incredible.” It was jaw-dropping. I was really, really happy to see that, and I saw Guillermo del Toro in some of the interviews he did talk about the breathing tents and the life of the tents, and every time I heard that or saw him speak about that, I just about fell out of my chair.