Grab a cup of coffee and strap in, because this pitch deck teardown is pretty different from most of the ones I’ve done to date.

Why? Let me count the ways. (OK, fine, there are only two ways.) But let’s take a closer look:

1. This is a blockchain pitch. The pitch deck is for Simba Chain, a blockchain company that raised $25 million in a Series A. It’s hella brave of them to submit their deck for a teardown. If you follow me on Twitteryou’ve probably noticed that of every three or four tweets, one has me making fun of blockchain tech.

It isn’t that I hate the people who build blockchains, but in the decade or so that I’ve been following the industry, I have come across only a tiny handful of companies that make sense to me (Arkive is oneand I did a teardown of its deck, too). Most of the time, I conclude that it’s a crying shame that people this talented are throwing away their time and talent building something in this space.

I know those are harsh words, and I hasten to add that’s my personal opinion, not that of TechCrunch overall. (Besides, you wouldn’t want me writing about this when we have an incredible crypto/blockchain/web3 team covering it.) I did want to mention it, because as much as I’ll try to be neutral, my disdain for blockchain tech will almost certainly show through in this teardown.

2. TechCrunch didn’t cover the round! I know, I know, that’s pretty much one of the rules here for the pitch deck teardowns. Having said that, The Wall Street Journal covered the roundas did CoinDesk.

The team slide shows that the CEO has been involved in 380 startups and 17 exits. You’d better believe I’m paying attention.

Suffice it to say that I’m stretching my knowledge to the max here, but I invite you to consider two things:

So here’s an invitation: Let’s see this as an adventure we can go on together, and if you have feedback, thoughts or comments, feel free to write them on a piece of paper and set it on fi … I mean, feel free to make fun of me on Twitter. I promise to be open-minded.

With all of that out of the way, let’s learn some stuff together!

We’re looking for more unique pitch decks to tear down, so if you want to submit your own, here’s how you can do that.

Slides in this deck

Simba Chain’s slide deck is incredibly impressive and covers a lot of ground. It consists of 19 slides, some of which sneak up on you with a surprise, and others that might leave you scratching your head.

There are two ways to make money in a gold rush: One is to dig out a giant honking nugget of heavy, yellow metal; the other is to supply the miners with picks, shovels and TNT.

I love how explicit Simba Chain makes that it is doing the latter — and not just for anyone, either. The company has been working with an incredible list of customers, including ones (such as the US Navy) that are notoriously hard to land contracts with. In the pitch and storytelling, Simba Chain leans on its customers’ pedigree to make its story come to life.

A lot of companies find it surprisingly hard to figure out their raison d’etre. When you’re an early-stage startup running a blue-ocean strategy, a thousand opportunities come your way at every turn. Cutting through the noise with a clear, strategic vision, followed by implementable tactics and repeatable operations, is the way to build a fast-growing, successful company.

This vision slide has an abundance of clarity: “‘Picks and shovels’ of the blockchain rush” is ChefsKiss.gif, and “What Stripe is to payments, Simba will be to blockchain” nails it down harder. I wish that this was the second slide because it gives even a chain skeptic like myself a reason to nod my head and mutter, “I see what you did there,” under my breath.

There’s a couple of head-scratchers here, so I’ll quickly name them: I have no idea what traction or investors are doing on a vision slide — it dilutes the message and muddles the story. If the last two bullets on this slide were moved elsewhere, this would be a perfect setting-the-tone slide for this pitch.

As it is, it’s simply extraordinarily good, so we’ll let the founders off the hook here. 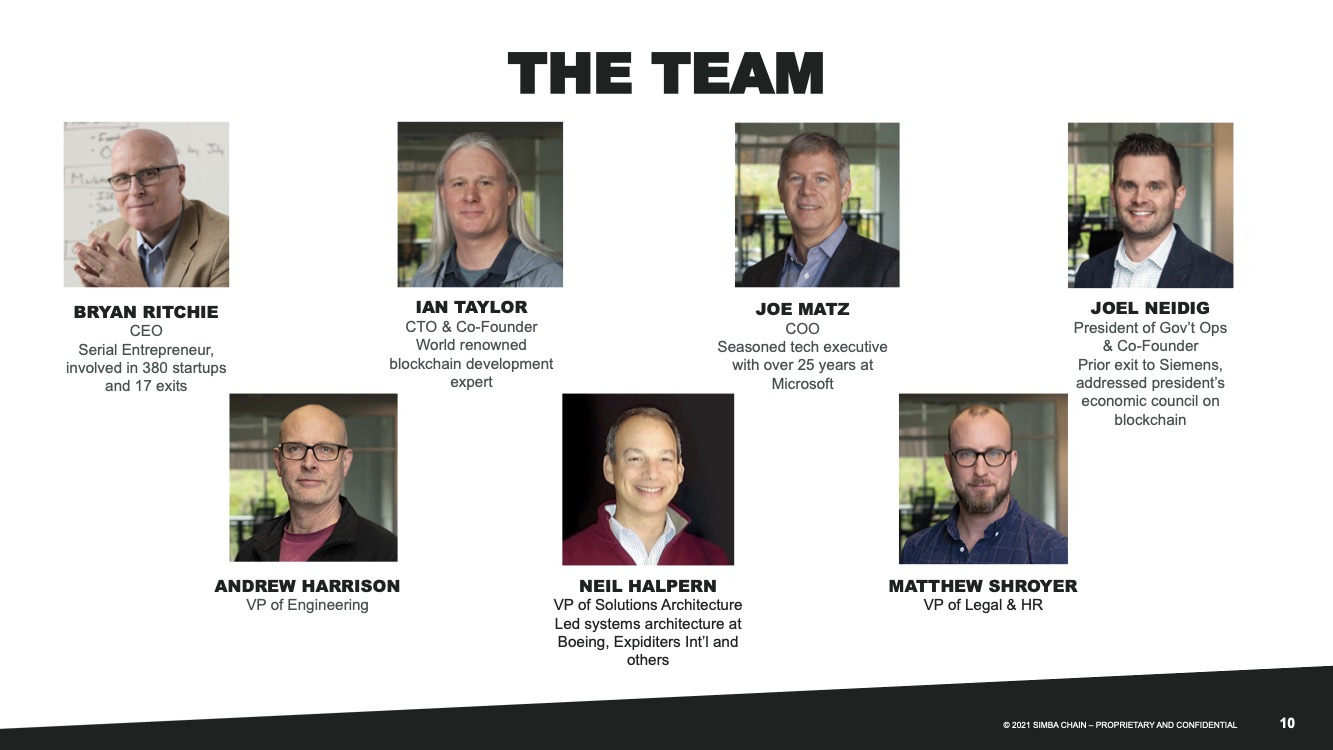 In a world where diversity matters, this slide earned an eye-roll from me. But then I started reading the descriptions.

There seems to be a bit of a disconnect there, and I suspect the founding team had an interesting time in due diligence. Still, the company successfully raised the money, so they passed due diligence, and if the company can back up the claim, it speaks to a lot of experience for sure.

The rest of the team is stacked with veterans, too. The CTO had been in IT academy for a decade before co-founding the company, and the COO spent 25 years at Microsoft before joining Simba Chain (although it appears he’s recently moved on to Google).

The Co-founder and ex-CEO, Joel Neidig, has an impressive resume as well, although “addressed the president’s economic council on blockchain” is somewhat fuzzy — I don’t know what that means. In any case, it appears he left Simbla Chain in July, along with COO Joe Matz.

This slide is pretty wild. I haven’t spoken to the company, as I’m trying to do these pitch deck teardowns as prima facie seems as I can, but there to be more to the story than you’d think at first glance.

If I’d come across this deck when the company was raising its round back in 2021, I’d have said, “There’s a lot of veteran talent here.” Looking at it with the benefit of August 2022 eyes, though, the picture is interesting: The CEO wasn’t there when the fundraising happened (he was promoted from board chair to CEO as part of this round), and two of the remaining seven folks on the deck have moved on.

My read is that the company brought in veteran leadership, which caused a shake-up. That’s not a bad thing — companies expanding rapidly often outgrowing their founding team and early employees — but it would certainly make me conduct deeper due diligence than usual to make sure there isn’t a cultural problem here.

In any case, the company currently lists 91 employees on LinkedIn, so it looks like it has been on a hell of a trajectory since its early days.

A best of a competition slide 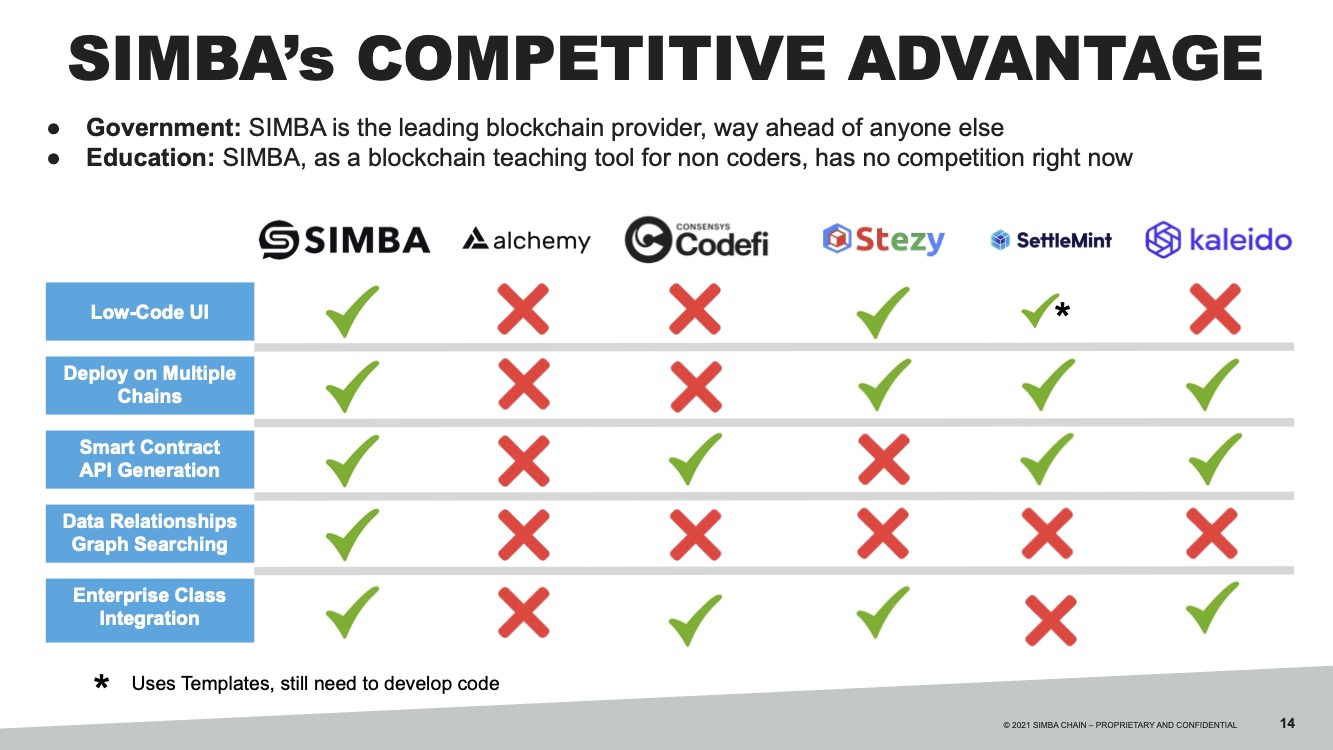 Blockchains and web3 are rapidly evolving spaces, both in terms of market acceptance and technology. It helps that Simba Chain was originally spun out of a DARPA contract and has a gathered credibility from being associated with established, well-respected academic organizations. This means it has a head start on making itself palatable for governments and enterprise customers alike.

Of course, the company wasn’t going to add anything to its own competition slide that doesn’t show it coming out on top. Even so, this is a rather impressive way to start a conversation. Follow-up conversations would be around why these points are so important to government customers and how that translates to overall competitive advantages.

Of course, investors will want to check whether Simba truly is way ahead of everyone else and that there is really no competition for no-code options. That said, this slide does something particularly elegant — by mapping out the competitive landscape in this way, you are able to guide the first pass of the competition conversation in your direction. Very clever and undoubtedly elegant.

In the rest of this teardown, we’ll take a look at three things Simba Chain could have improved or done differently, along with its full pitch deck!