A small handful of Snap Kit platform developers have not yet complied with the new guidelines around anonymous messaging and friend-finding apps announced in March. The Snapchat maker revamped its developer platform policies on March 17, 2022, to ban anonymous apps and require developers to build friend-finding apps to limit access to users 18 or older. The policy changes were effective immediately and existing developers were given 30 days to come into compliance — a date that would have passed last month.

It is now mid-May and some developers of the newly banned and restricted apps are not yet meeting Snap’s new requirements, we’ve found.

Snap says only a small number of developers asked for and were granted additional time to bring apps into compliance, as they worked in good faith to make the necessary changes. But it may be difficult for consumers to tell which apps are compliant, which are skirting the new rules, and which are marketing Snap Kit integrations that they actually don’t have.

For example, one of the apps offered an extension is Sendit, the anonymous Q&A app that surged to the top of the App Store last year after Snap suspended other top anonymous Q&A apps, YOLO and LMK. Those latter two apps had been banned from Snap’s platform after the company was sued by a mother of a teen who died by suicide after being bullied via those tools. This year, Snap was named in a second lawsuitalongside Meta, related to an alleged lack of safeguards across social media platforms which a mother says contributed to her 11-year-old’s suicide.

Snap has since conducted a review of its platform policies with a focus on potential child safety issues related to third-party apps that integrate with Snapchat’s features and functionality.

This culminated in the new policies that were introduced in March which impact apps that build using the Snap Kit platform. This suite of developer tools allows third-party apps to offer sign-in with Snapchat for user verification, or utilize Snapchat features like Snap’s Camera, Bitmoji, Stories, and more.

Sendit appeared to be non-compliant as it was not utilizing a required feature, as specified by Snap’s own developer documentation.

Here, Snap offered an example of how something called “Identity Web View” could be adopted by third-party developers who today use Snap Kit to build anonymous Q&A apps. The feature would allow anonymous Q&A apps to come into compliance with the new policies as it will require apps to present a new modal to users that they must click to send their Bitmoji avatar URL and abbreviated Display Name to the third-party application. Then, they can use the third-party app to post their question — but no longer anonymously. Essentially, it allows Q&A apps to continue to function in much of the same way as before, but without the potential dangers of anonymous bullying — the user is identified.

Sendit, however, doesn’t currently use this modal even though it’s the example shown in the developer documentation screenshot. But Snap says the developer asked for more time to make these changes, which was granted. Snap believes the app, currently No. 8 in the Lifestyle section on the App Store, will soon come into compliance.

Other third-party apps also appear to be still operating as usual and, at first glance, seem to not be in compliance with Snap’s new policies.

Apps skirting the rules — or operating outside them?

But this is where things get more tricky — some apps have been granted an extension, some are routing around Snap’s rules, and others are marketing themselves as Snapchat-connected apps when they’re not actually using the SDK.

For instance, the app LMK — to be clear, a different LMK than the original LMK app that was banned last year — is still offering its “anonymous polls” app which integrates with Snapchat’s features. The app is rated 12+ on the App Store and is functional as usual. But LMK was among that requested and was granted an extension.

Anonymous messaging apps HMUrated ages 9+ on the App Store, and Intext, rated ages 4+ are also still operating. Both advertise themselves as Snapchat-connected apps. But Intext has been banned from Snap’s platform — you’ll get an error if you try to authenticate with Snapchat using the app’s “Login with Snapchat” button.

HMU appears to have skirted the ban, however. Its app still works.

Meanwhile, a number of friend-finding apps, like Hoop, Wink, Swipr, Purpand Dope — all of which are now supposed to be only available to adult users — are still published on the App Store with an age rating of 12+, as of the time of writing. If Snap had vetted and approved them, then they would have the highest age rating on the App Store, which is 17+. (Apple should change this to 18+!)

Confusingly, these apps’ lower age ratings don’t necessarily mean all the apps are breaking Snap’s policies. As it turns out, some of these apps are simply positioning themselves as being Snapchat-connected in their marketing materials — like their App Store screenshots. But in reality, they’re working around their lack of access to Snap’s SDK in other ways.

For instance, Hoop’s App Store page says it’s for making friends on Snapchat, and yet it’s downloadable to anyone aged 12 or up. If it was a Snap Kit platform app, then it would be in violation. But Hoop is not in violation because it’s no longer using the SDK. (But who could tell?!) 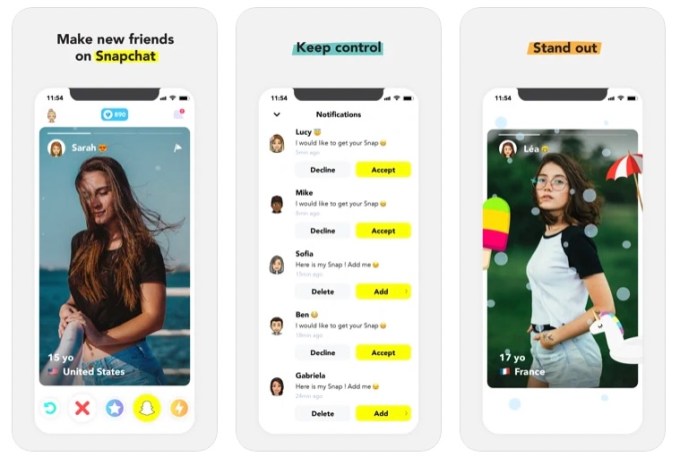 Instead, Hoop has users enter their Snapchat username during onboarding and provides an in-app Snapchat button to “request” someone share their username with you. It’s a workaround that allows the app to still function as a tool for finding friends on Snapchat, but allows the app to operate without relying on developer access to the SDK. But this sort of deviousness on developers’ parts could cause complications for Snap in the future, as it faces potential litigation and regulations related to platform safety.

Requests for comment to the third-party app makers themselves were not returned.

For parents, this lack of consistency across the Snapchat app ecosystem also means they can’t rely on using Apple or Google’s built-parental controls to block the Snapchat friend-finding apps from being downloaded to their child or younger teen’s device. And, once in the hands of younger users, bypassing the age-gate is as simple as using a fake birthdate.

Snap tells us that since it announced the new policies, it has removed the vast majority of apps that were out of compliance with its policies.

But given the extent to which apps are skirting the rules, it could be more useful if the app stores themselves would integrate these same guidelines into their own app review processes. Or perhaps this is all a sign that regulation, in fact, is needed to protect children and teens from accessing experiences that are either potentially harmful or designed for adults.

After all, Snapchat shares the top charts with other apps that cater to a younger, often teenaged, user base — and the rules that apply to it, should apply to anyone.

For instance, one app eating into the Gen Z market is the newer app called BeReal, which prompts users for spontaneous photos. BeReal has now surpassed 10 million cumulative downloads to date, according to estimates from app intelligence firm data.ai (formerly App Annie). 3.3 million downloads took place in Q1 alone, and the majority of users in key markets are Gen Z, the firm said.

Another app, LiveIn, caters to Gen Z as well by allowing users to post photos to each others’ Home Screens via a widget — a feature BeReal also adopted. It’s now No. 2 on the US App Store’s Top Apps chart, while its rival Locket Widget, is No. 24.

These apps are offering experiences that not only cater to Snapchat’s core demographic, but also features that overlap in some ways with what Snapchat is used for — fun, off-the-cuff photos that aren’t meant to stick around. While Snapchat is still growingits rivals could expand their own platforms to adopt more Snapchat-like features over time, at which point they could also become a cause for concern if they ventured into similar anonymous Q&A or friend-finding spaces.

For now, however, these apps present a different type of threat: one that could see Snapchat losing its users’ time and engagement as they try out new ways to connect with friends.