When the three founders of Faros AI were working at Salesforcethey helped develop the company’s artificial intelligence, known as Einstein. While the goal of Einstein was to help companies become more data-driventhe engineering team building it experienced the same pain of tracking engineering operations data as any other company.

Faros AI CEO and co-founder Vitaly Gordon said that despite Salesforce’s vast resources, they still suffered from a dearth of data and a lack of adequate tools for collecting it. “We were scaling that operation within Salesforce and working with I think close to 10,000 customers, but we realized that we actually were not practicing what we preach as a technical organization [when it came to making use of data]Gordon said.

That their engineering team lacked the kinds of tools it was building for sales and marketing teams to put data to work was a real eye-opener. They began working on the problem as a side project before coming to the realization that this was a big problem for everyone.

The three founders — Gordon, in addition to Salesforce Einstein alums Matthew Tovbin and Shubha Nabar — left the company in 2019 to build Faros AI to solve the problem. They wanted to make it easier for engineering management to look at data and figure out things like how long it will take from the point a developer finishes coding until that updated code lands in production in front of customers.

They began building a product that would connect to engineering systems like Jira, Jenkins and GitHub, including an intelligence layer to make logical connections across the data that they could deliver to customers in a dashboard. So, for example, the system can see that the engineer signed into GitHub is the same one signed into Jira, and it can trace the history and movement of an engineering project across systems. 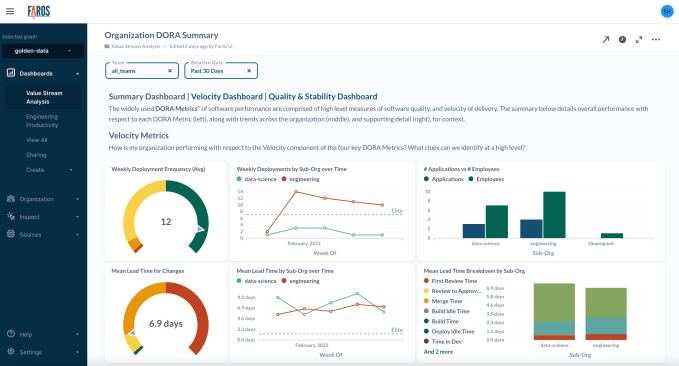 They have built over 50 connectors to connect to common tooling out of the box, but decided to open source the connector technology, so engineering teams could connect to any system, regardless of whether Faros supported it natively or not. Eventually, they also decided to develop an open source version of the entire product called Faros CE (short for community edition), which they are making generally available today to download and install.

The enterprise version is a fully hosted SaaS product with the kinds of extras you would expect for enterprise customers, like security controls, role-based access, connections to enterprise authentication systems like Okta, and so forth. Among the customers using it today are Box, Coursera and GoFundMe.

The startup has 20 employees and expects to double that by the end of this year. It already has a diverse executive team, with a 50% men-to-women ratio, as it tries to build a diverse team more broadly. Gordon said they have been able to draw on their network from Salesforce Einstein, which was a diverse team, and their previous time at LinkedIn to help achieve that.

The company also announced a $16 million seed round today. He received the first $3.75 million in October 2019 shortly after launching. After achieving certain milestones with investors, they received another $3 million or so, and recently got the remainder. The funding was led by SignalFire, Salesforce Ventures and Global Founders Capital with participation from several industry angels.

It’s worth noting that other startups like Pinpoint and Acumen are also working on the same problem.