Immigrants to the United States face myriad challenges besides having to learn a new language. In many cases, they are dealing with a foreign and complex financial system, may struggle with finding adequate housing and health care and just generally feel lost.

Welcome Techa startup aiming to build “an operating system” for immigrant families in the US, has raised $30 million in new capital to help these individuals not only adjust to – but feel comfortable and “thrive” in – their new environment.

Built by immigrants for immigrants, Welcome Tech wants to do just what its name indicates — help immigrants feel more welcome, have an easier transition and achieve greater success when moving to the US

The raise follows the LA-based company’s $35 million Series B in April 2021, which was co-led by TTV Capital, Owl Ventures and SoftBank Group Corp.’s SB Opportunity Fund.

TTV Capital led Welcome Tech’s latest capital infusion, which brings the company’s total raised to date to $70 million since its 2010 inception. Joining TTV in doubling down on their investment in the company were Owl Ventures, SoftBank’s Opportunity Fund, Mubadala Capital and Next Play Capital.

In recent years, a number of digital banks have emerged to focus on specific demographics in the US For example, Houston-based Fair raised $40 million Last year and its multilingual digital bank and financial services offering is too focused on immigrants; TomoCredit, which has developed a credit card focused on building credit history for first-time borrowers, raised $17 million in 2021; First Boulevard raised $5 million for its digital bank aimed at the Black and LatinX communities and Cheese secured $3 million for its digital bank that is aimed at primarily serving the Asian-American community

Welcome Tech co-founder, CEO and president Amir Hemmat says his company’s initial approach was different from others in the space in that rather than launch a banking product and then set out to earn the trust of the community it aims to serve, it first” worked hard to earn that trust and understand the community’s needs.”

So in its first years of existence, Welcome Tech focused on providing educational resources, information and services for immigrant populations, with an initial primary focus on the Hispanic community in the US

The goal of its first offering, dubbed SABERESPODER (meaning Knowledge is Power in Spanish), is to serve as “a widely recognized and trusted resource” to members of the Hispanic community in the US, the company says.

The company is today approaching 4 million registered and active users.

Armed with knowledge and data that it had gathered over the years, Welcome Tech in November of 2020 launched a banking service, including a debit card and bilingual mobile app.

“We blew through about 1 million app downloads of our digital wallet a few weeks ago,” Hemmat told TechCrunch. “We believe the future of immigration starts with our digital wallet, and getting the consumer banked in a fair way with the ability to transact and transact fairly.”

From March 2021 to March 2022, the company says it saw a 2,200% increase in wallet growth. Meanwhile, revenue generated from the digital wallet was up 2,800% during the same timeframe. To date, Welcome has opened over 500,000 “fee-free” and bilingual banking accounts for the Hispanic community, according to Hemmat.

In January of 2021, it launched a monthly subscription offering that gives users access to discounted resources such as medical and dental professionals. For example, subscribers have access to consultations with Spanish-speaking doctors “whenever they need it,” discounts of 10%-85% on medication and 10%-50% on dental services. There is no requirement for health insurance, all immigration statuses are accepted and the offering includes bilingual customer service.

That subscription service saw 50% quarter over quarter growth between Q1 2021 through Q1 2022, according to Welcome Tech.

The company also offers a Rewards Center which offers a financial incentive for participating in surveysan offering called FarmaSEP to help users save money on prescriptions and PODERSegros, to help them obtain auto insurance.

While many companies are using digital advertising to attract customers, Welcome Tech also has an offline approach. For example, it partners with embassies and consulates across the country, and has a “proprietary” ability to have access – and generate growth – from those locations, according to Hemmat. 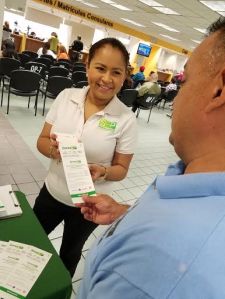 “One way we’ve outpaced others on user acquisition is by taking a bet on education when nobody else would,” he said. “Our branded platform is all about being a resource and trusted partner to the American consumer. and we delivered that by investing heavily in education and building a portfolio of content for the immigrant consumer.”

Using the data it has collected over the years to drive the services it offers has helped significantly drive down its customer acquisition costs, Hemmatt said.

The executive says he’s “proud” of the fact that there are more players focusing on this demographic.

“It’s long overdue,” he said. For us, It’s really about being that ‘Super App’ for the immigrant consumer, and so much more than a single service. And so a lot of these service providers may be a partner for us down the line. Ultimately what we want to be is a consumer’s transactional platform of choice.”

Since its last raise, Welcome Tech has expanded its team from 20 to 80 people, which is made up of 48% “diverse minorities,” according to the company. And, its board of directors is now over 71 percent ethnically diverse, it says.

The company remains focused on growth and is not yet profitable, according to Hemmat.

“We want to build an operating system for immigrants,” Hemmat said. “We’re a lifestyle brand and platform aimed at building a better future for immigrants, and this raise will help us take massive steps toward that.”

Looking ahead, Welcome would eventually like to expand outside of the US

“We don’t see any limits on the business model and tech we’ve built,” Hemmat said.

“One of the things you do in VC asset allocation is lean in to the winners,” he told TechCrunch. “You really buy into the ones that are doing well and put all your resources there. I think in this case, for the existing investors, this raise was about taking a company that had a lot of tailwinds, a big market, that was performing and converting and executing exceptionally well, and helping it go faster and be more aggressive on how it serves and builds.”

Garrad has backed a number of other fintechs over the years, including Green Dot, Greenlight, Greenwood, KOHO and Ando. In his view, Welcome Tech is the “category winner” in its space.

“We see Welcome Tech being used as a Super App for this demographic, as we’re really well beyond financial products to the customer base,” he told TechCrunch. “It’s just that financial products are the low hanging fruit right now…”

Garrad also touts the company’s ability to successfully initiate a subscription model with “highly engaged” users, something that has eluded most traditional banks and financial institutions.

“I think that’s a big moat around any of the incumbents,” he said. “In some ways, it’s like a Netflix or a CostCo, where a person can be a member and Welcome is aggregating all the products you need for your life in this country as an immigrant, and it’s going to get it to you at a discount .”